Borderlands 3 has had its preorder availability temporarily pulled from the Epic Games Store amidst the PC storefront’s Epic Mega Sale.

A user on ResetEra noted that the game was on sale for US $49.99, and on top of that, a $10 discount, which brings the final price down to $39.99. However, the preorder button has been replaced with a tag that says “Coming Soon”.

The reason behind the decision to pull Borderlands 3 temporarily from the Epic Game Store is unclear, but it seems to have to do with the game’s publisher, 2K Games, not authorizing the discount price. On Twitter, prominent streamer CaseyExplosion elaborates that “what normally happens during a sale event (like a Steam sale) is that the publishers or developers opt in, and they set the discounts. What Epic is doing however, is something very different.” Even though Epic is eating the extra $10 cost out of its own pocket, she notes that publishers and developers are not entirely happy “because they had no say in this, and it immediately devalues their games, especially indie titles.”

Now, what normally happens during a sale event (like a Steam sale) is that the publishers or developers opt in, and they set the discounts. What Epic is doing however, is something very different.

Take special note of this: "…at no cost to the publisher or developer." pic.twitter.com/SXFUAmqQr0 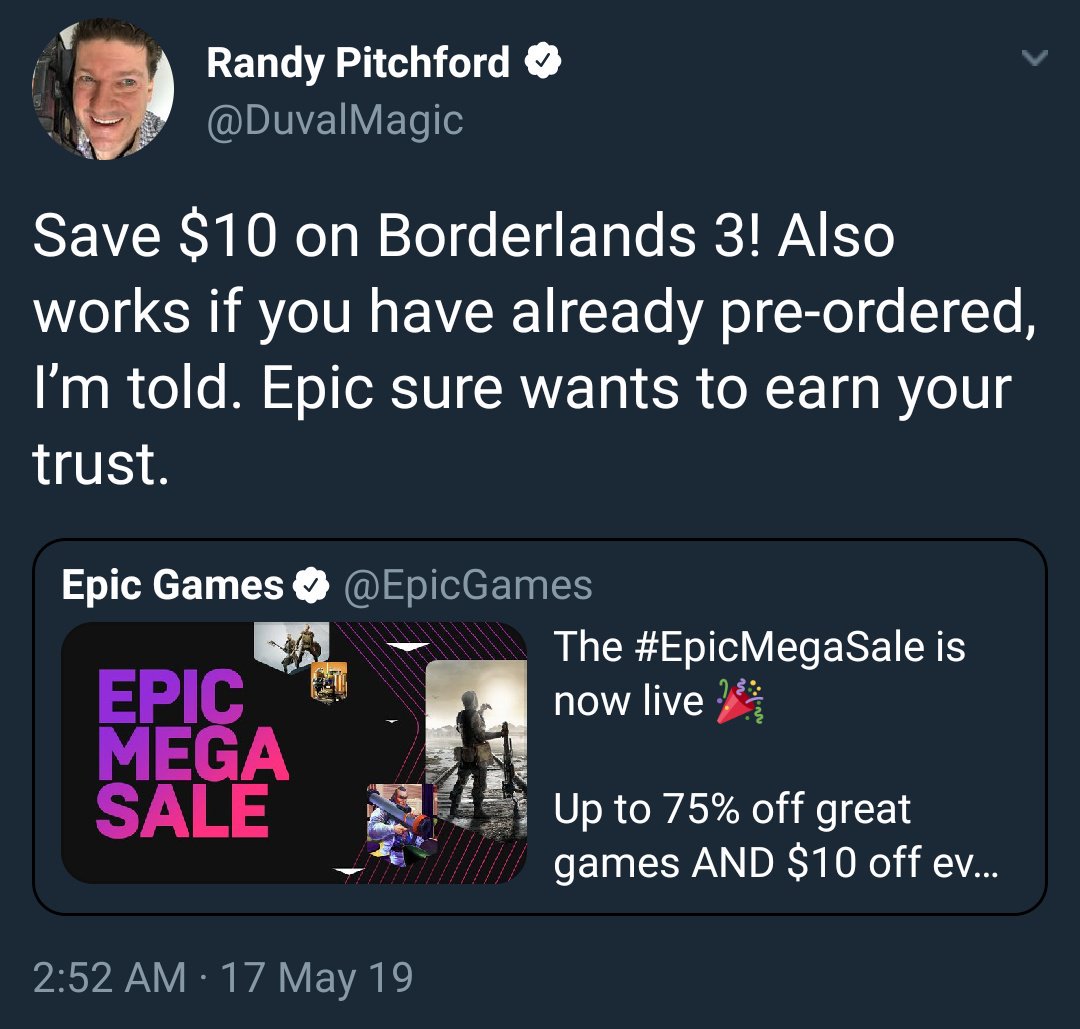 This latest debacle is just one to hit the Epic Games Store and its Epic Mega Sale. Supergiant Games caught controversy as a result raising the price of Hades during the sale and has since issued an apology. Paradox Interactive also pulled Vampire – The Masquerade: Bloodlines 2 from the Epic Games Store, saying in a statement to Kotaku “We are in discussion with Epic regarding the temporary removal of Vampire: the Masquerade – Bloodlines 2 from the Epic Game Store. The game will return to the store soon! Any purchases made while the game was discounted during the Epic Mega Sale will be honored and no Masquerade violations will be assessed.”

During Epic’s sale, which runs through until mid-June, games are discounted to up to 70% off, and games over $14.99 are receiving an additional $10 off.