At PAX West 2019, OnlySP had the opportunity to speak with Steve Filby, who is part of Evil Empire, a team made up of previous developers of Motion Twin focused on more Dead Cells content, to discuss the new Dead Cells update ‘Who’s the Boss’.

OnlySP: Are there any more major updates in the works, something similar to the size of ‘Rise of the Giant’?

Filby: Absolutely! ‘Rise of the Giant’ was a bit of a test. It was also a thank you to the community, as well as extra content that we always wanted to see in the game that we just didn’t have time to finish. We did free DLC because we were just blown away from the response with early access. It was also to see how many people were interested in DLC content. We were thinking about doing paid DLC with extra content, a couple of bosses and levels. We just have to figure out how to do it and do it in a way that the community feels good about and is happy with. We’ve got a bunch of plans, at least a year’s worth of content upgrades, and system updates from changing the mutation system and adding weapons to re-balancing the economy and making the runs shorter. We’re not done yet.

OnlySP: What made you bring Dead Cells to phones and what has been your biggest hurdle?

Filby: It’s a long story! Motion Twin has been around since 2001 and we used to do web games and mobile games. When we first started working on Dead Cells, it was a mobile game and was supposed to be cross platform with PC and it sucked. So we stopped and just made it into a hardcore action platformer for PC.

However, when I used to work on mobile with Motion Twin, we went to a show and I met a French guy who owned a company that specializes in bringing PC games to mobile. Three years later, I meet up with him again and I ask “Oh hey, are you still doing that?” He replied, “Yeah” and I said “Alright well we did Dead Cells!” He was all like, “I know! You reckon I could bring it to mobile?”  I told him “I don’t know, I don’t think you can! It’s made for PC and consoles.” He told me to give him three months and if they can make it work on mobile, then they’ll pitch us on a mobile version!

At first, we didn’t want to do since we were done mobile as we had already tried. He managed to pull it off, but then the biggest challenges was that it was made to be played with a controller. You’re looking at like 20 buttons, so we had to come up with different ways to make it interesting and fun to play on mobile. We wanted people who play on mobile, who are more casual, to access and have fun.

And then there was the technical challenge of moving a game that was meant to be played on a PC to a phone that only has like, 500 MB of RAM. We just acted as quality control. We did testing for them, as they’d send us a build. We would provide feedback on what to change, and what we liked.

OnlySP: How much longer do you expect to be able to work on Dead Cells before having to move to a new project?

Filby: The first problem is the money. As long as it’s profitable, Dead Cell is paying for the Motion Twin core team and our team, Evil Empire, who are working on Dead Cells and that’s a lot of money per year. We need to make a certain amount, so if we don’t make any more money then we’d have to stop. You also don’t want to work on the game for so long that you ruin it. Sometimes you have to know when to stop. From an artistic perspective, there’s a limit to what we can do. I would say at least two more years of content for the base game. Maybe we’ll make Dead Cells 2 or a multiplayer version of the game. Maybe we’ll do a Dead Cells version of Hollow Knight, a proper Metroidvania game. We have a lot of stupid ideas we could do.

OnlySP: Do have any new bosses or biomes planned out?

Filby: Yes, but we’re trying to work out how to release. Do we do paid DLC or a free update? From an economic perspective we’d like to do paid DLC but we have to talk to the community. Ideally, what we’d like to do is an entire different branch. Right now, you have three branches and we’d like to do a fourth branch. However, that’s like a year’s worth of work so financially we can do that.

OnlySP: Is the second ending of five boss cells the true ending or is there more to come?

Filby: That was a contentious point internally. The team didn’t want to put story content behind such a high difficulty. I think there’s like, less than 0.02% of people who finished five boss cells. None of us have beaten it. The best player in the company has only gotten past three boss cells. It’s one end to the game, but we don’t know what we’ll do in the future. Maybe we’ll change it, move things around, but it is what it is at the moment.

OnlySP: Would you like to see Dead Cells adapted into other media such as comics or shows?

Filby: Hell yes we would! BobbyPills is an animation studio in France that did our animated trailers for Dead Cells and they’ve done cool animations. So just to have the chance to work with them for something that was only a minute long, it was mind-blowing for us. So if we could TV, movies, or manga that would be so cool. But we have to find the right partners and the right opportunities.

OnlySP: What is a funny development story around a weapon?

Well, there used to be fall damage. Our lead designer, Seb [Bernard], put that in the game. It’s one of those things that used to be cool, but not anymore. One day, he put it in and came to work. We were having a design meeting about whether we were going to leave the tower defense stuff in the game or not. One of the developers, Mathieu, [Pistol] looks around and was like “is it just me who’s pissed off at the fall damage?” Seb looks around, “what do you mean?” And everyone’s like “Yeah no, we can’t do this anymore. Let’s take it out.” It lasted all of two days before we had to take it out.

The turrets in the game: at some stage it was a tower defense game. It used to be you were just a turret. You would automatically shoot a bow and move around. You would place turrets in a preparation phase and then monsters arrive. A lot of people don’t realize but the turrets are in the game because of that ancestry design. 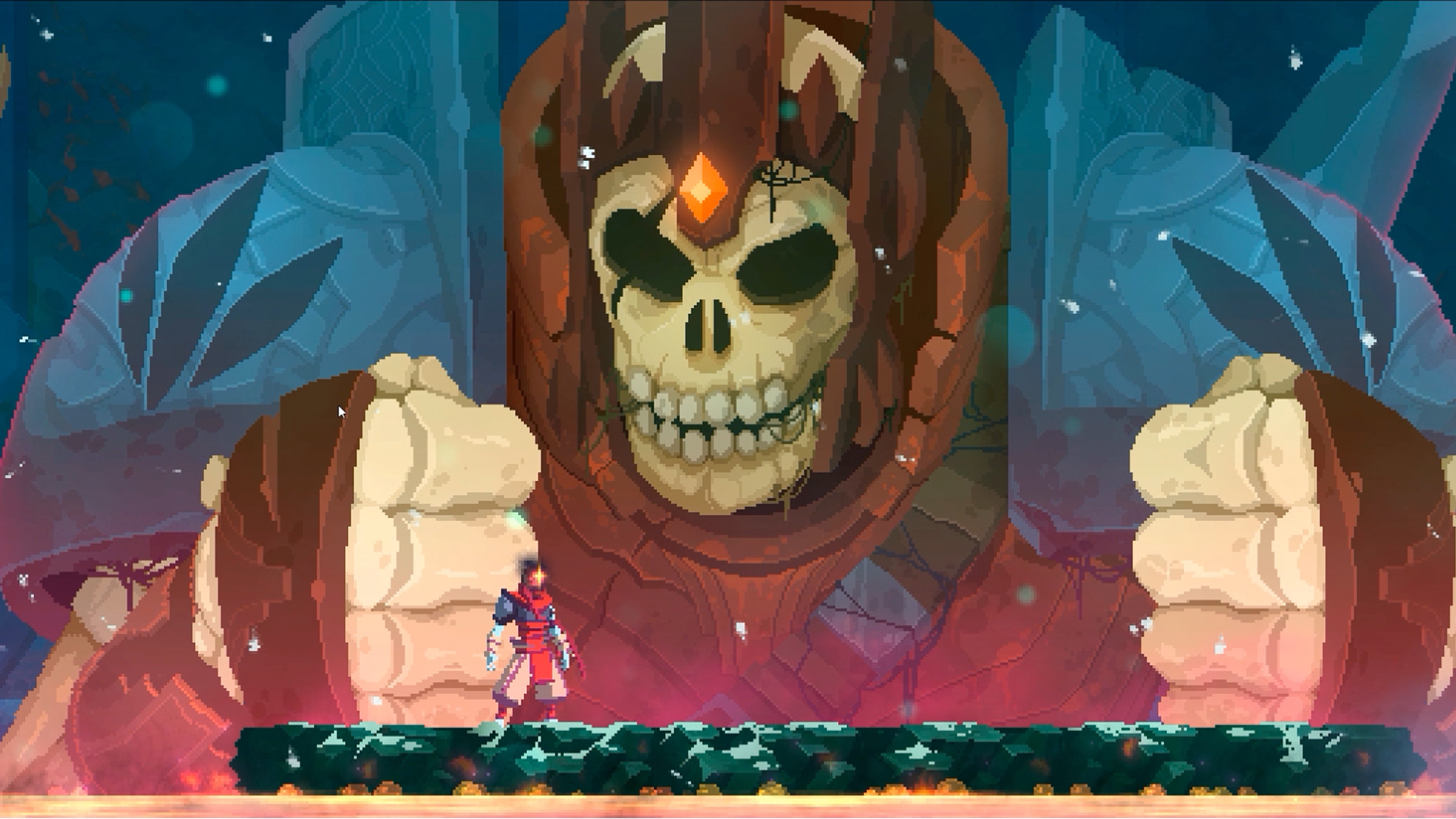 OnlySP: Do you plan on adding in anymore unique modifiers?

Filby: The mutation system at the moment you are only allowed to pick three mutations. For brutality, there’s one build that’s the best build. When you run with tactics, it’s the same thing. Players always pick a build based on the difficulty level and based on the upgrades they picked. And so that kind of locks you into a trap. We recently added a bunch of mutations that made it more viable to play brutality and tactics as opposed to just brutality or just tactics because we want the players to have a choice. We’ll definitely going change that whole system and if we change the system, we’ll have to change the modifiers.

OnlySP: You briefly mentioned this, but had there been any more thought to co-op or multiplayer?

Filby: Because Dead Cells started as a free-to-play multiplayer web and mobile game, yes that’s always been something we thought of. However, I feel like co-op in this kind of game is a bit of a gimmick. You can play together but it’s never too much fun, and it doesn’t add anything to the gameplay. It’s technically challenging, and we can do it, but if we’re going to add co-op we want it to be special so we might do different game mode or do something else, like PvP or a Mario Kart type thing. So yes, but how and when, we don’t know yet. We’re still at the design stage and we just throw a bunch of stuff at the wall and see what sticks.

OnlySP: So Motion Twin is actually working on a second game, as well as created a new team called Evil Empire. Can you go into more detail on what we can expect in the future?

Filby: I’m the ex-head of studio of Motion Twin and I left so I could work on multiple games. I’ve been the public face of Motion Twin. I already had an existing company. We were sitting around having lunch and both studios work in the same office. Motion Twin was like “It’s been five years since we worked on this game and we want to move on and make something different.” But a part of the Motion Twin team was like “Dead Cells is really successful, so why would we stop now?” I was sitting there thinking, “How about you guys make a new game, and I’ll build a team to work on Dead Cells?” So we [Evil Empire] brought in another guy from Motion Twin, as well as Ben and Joan having been working on Dead Cells since the beginning. We have two teams, and Motion Twin is still a co-op so the company can’t get any bigger than 8-10 people.

Motion Twin is prototyping its new game right now, and don’t know what it’s going to be yet. The company is up to about eight prototypes so far, I think. They’re all different and weird things. There’s a game in the cloud, a stealth prototype, all kinds of crazy ideas just to see what sticks.

For Evil Empire, it’s all Dead Cells, Dead Cells, and more Dead Cells. We want to build our own game at some stage, but right now it’s learning from Motion Twin and sharing the space. So we’ll come up with ideas, like the bosses were all from [Evil Empire]. So we’re like, “What do you think?” Motion Twin would go, “Oh that’s a good idea. Let’s try it out!” We’ll try and Motion Twin will go, “This is good, this is crap, let’s change this.” We’ll work together until we have something good. That way, Motion Twin can focus entirely on the next game and the Evil Empire team makes the updates for Dead Cells.

Remnant: From the Ashes as a Single Player Game is a Soulsy Slog

Control Getting New Game Mode This Year, Major Expansions in 2020