One of the first games we were able to get an early look at on the first day of E3 was Shiness, an Action-RPG being developed by French indie studio Enigami and published by Focus Home Interactive. The game is set in the fantastical world of Mahera.

Beginning as Chado, a young Waki from the Kimpao Islands, your immediate goal is to find your friend Poky, who became lost after the two of you crash landed on Adron Island. Wakis are not welcome in this place, as evident by some choice dialogue from certain NPCs you’ll encounter, and finding your friend is only compounded by the power struggle between seven kingdoms in this world – an ethereal world in the middle of a universe that is on the brink of destruction. Ever brave, you trudge on – first, your friend, then, the universe, with the Shiness, a mysterious spirit instilled with magic, at your side.

A quick, comprehensive overview of the straight-forward combat system shows that kicking and punching are the two main ways to stave-off enemies. You also have the ability to dodge ranged attacks by rolling out of the way, and a special magic attack that is fueled by the amount of “Hyper” (like mana) you gain by performing basic attacks. While the combat mechanics do not take much time to learn, their simplicity does not make the gameplay any less fun. It’s reminiscent of a traditional arena fighter, focusing on combos, parries, and blocking.

After you complete each combat encounter, you will receive a score calculated by the speed in which you dispatched your enemies. The higher your score, the greater chance you will have of receiving rare loot that can be used for crafting various items later in the game. We were only able to fight easier, smaller enemies, so those could be dispatched quickly by either using one kind of basic attack or alternating between the two. This built-in incentive system encourages the player to strategize effectively and rewards them for doing so. 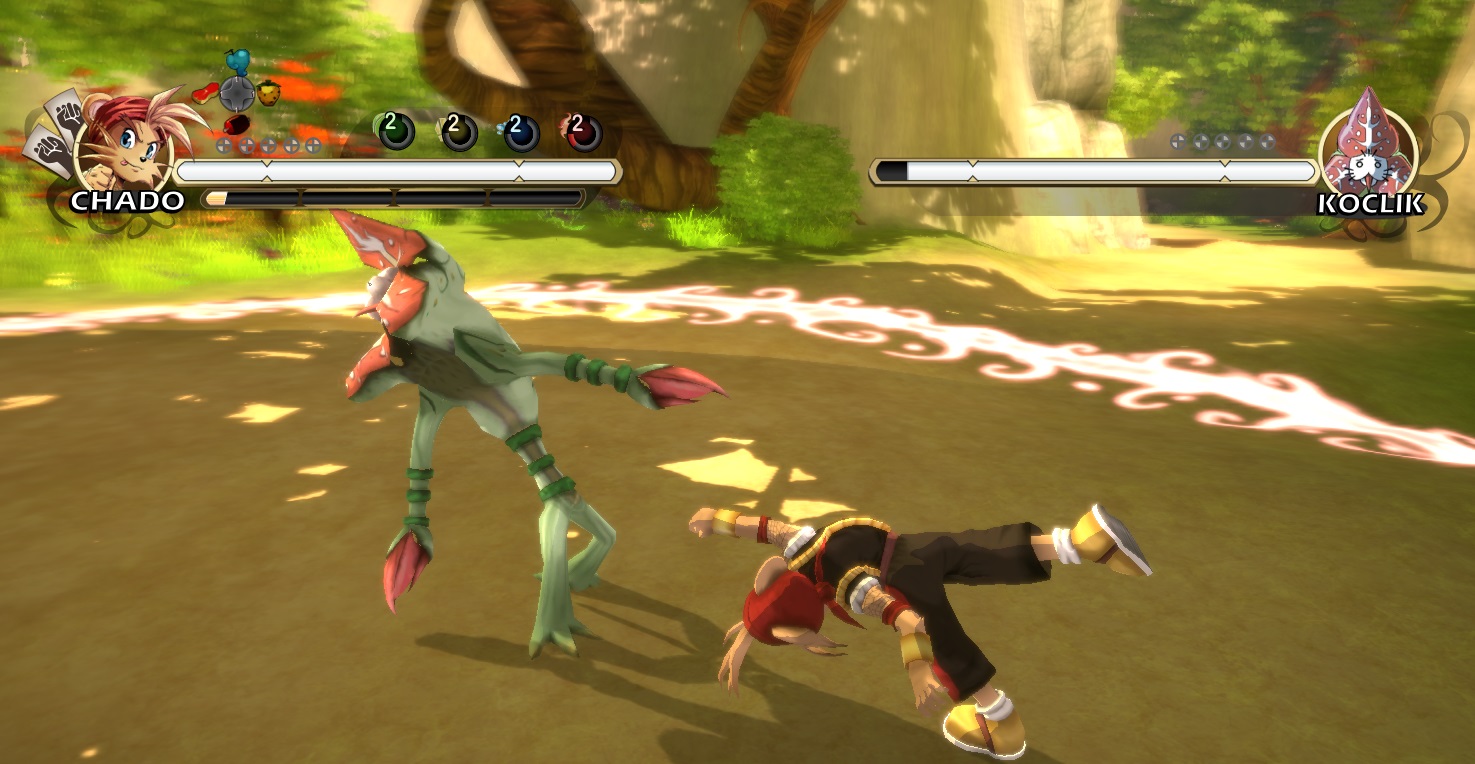 As Chado, you also have the ability to summon a large rock that you can use as a counter weight to unlock areas and throw when needed. You can summon two rocks at a time; if you summon a third, the first rock you put down will disappear.

One of the most important aspects to the narrative is the dialogue options; your choices will shape your relationships with other characters throughout the game and establish your reputation. In speaking with a non-Waki, for example, they could very well be antagonistic toward you simply because of where you are from, so tread carefully; they may or may not want to help you on your journey.

In addition, you’ll be able to play as four other characters other than Chado. You’ll unlock them as you continue through the main quest, and, once you have, they can grant you access to sealed off areas (each secret area is indicated by a color-coded object that designates which specific character can unlock it.) Not only will you be able to form the reputation of Chado through quests and side quests, but you can for the other characters as well. While we didn’t see much of this mechanic and did not have the chance to play as other characters, it was evident that the choice-based system was vast and would provide great dialogue options.

Shiness will be released in 2016. For more information about the game, check out our Indie Roundup here.

Joanna Nelius
Joanna is drawn to sci-fi and post-apocalyptic worlds, and games with a generous amount of gore. When she's not gaming, she's convincing her friends it's a good idea to go into abandoned buildings.

The Solus Project Review – Lost In Gray and Brown