Super Crush KO is about a girl named Karen whose cat, Chubbz, is stolen by aliens, which forces her to fight through the alien invasion to bring Chubbz back home. The game’s vibrant colors and art style is reminiscent of older television shows, such as The Powerpuff Girls and Sailor Moon, and makes the game’s charm stand out even more.

Super Crush KO’s combat draws inspiration from other action games—such as the God of War trilogy, Bayonetta, and Devil May Cry—all within a 2D style. The player must accumulate combos to increase their combat grade, similar to that of Devil May Cry. Different types of punches, uppercuts, and projectile attacks all contribute points to the stage’s score.

After every stage, Super Crush KO will grade the player based on their achieved ranking. If the player does not maintain momentum, the grade will continuously drop, incentivizing them to be aggressive. Karen also has a projectile gun, but cannot spam its usage due to an energy requirement. Additionally, Karen can dodge into incoming enemy bullets to earn extra points.

All of Karen’s abilities are unlocked early in the game, allowing the player to utilize each of them for over-the-top combos. Karen will occasionally come across food items that can grant her new attacks.

For example, the Warm Pretzel gives her Twister Drill, allowing Karen to dive far distances and damaging enemies along the way. Cheesy Pizza Slice gives her the Uppercut Slice, allowing her to attack enemies above her, as well as launch enemies up into the air to keep her combo going. The Salty Sweet Popcorn grants Karen the Air Pop ability, where she can lock onto enemies while in the air and slam into them. Lastly, the Super Deluxe Hotdog gives Karen the Super Beam KO, much like Goku’s Kamehameha. Super Beam KO acts as Karen’s “super attack” and requires a gauge to be filled before it can be used.

The food motif continues as the Karen will encounter vending machines, which serve as checkpoints during the level in-between stages. Occasionally, players will find hearts floating around the level that can restore health. The demo’s boss utilizes both short and long-range attacks, requiring players to alternate their strategy on the fly. At the end of a level, the player will receive a final score, factoring in the base score, the amount of time to finish, how many continues were used, and the number of hits taken. 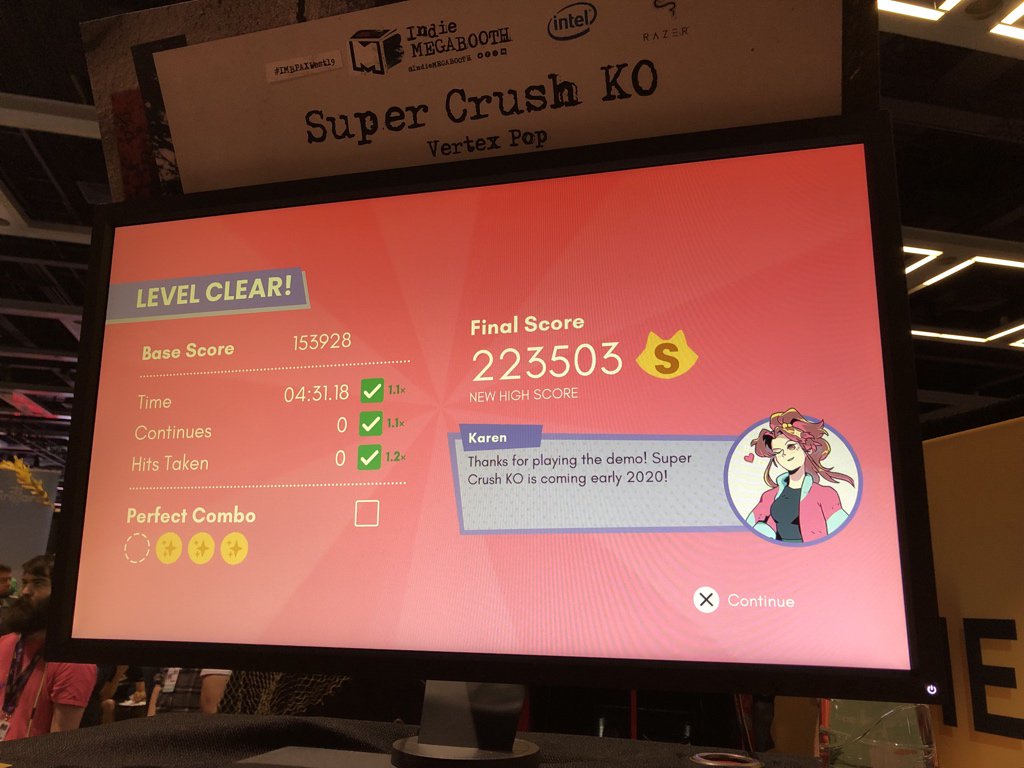 Super Crush KO is a fun experience, but the combat left more to be desired. According to the game’s official website, the only ability withheld from the demo was the Ground Shake, given by the milkshake item. With only four abilities to choose from, I can see the combat getting a bit stale. The game also does not offer some sort of standout mechanic, such as Bayonetta’s Witch Time or Kratos’s flashy and gruesome finishing moves; however, perhaps that can be attributed to the game’s simplicity.

Overall, Super Crush KO is a fun and simple take on the brawler genre. The game does not take itself too seriously, and the art style allows it to stand out from the gritty contemporaries that the battle system draws inspiration from.

Super Crush KO will release on Nintendo Switch and Steam in 2020.